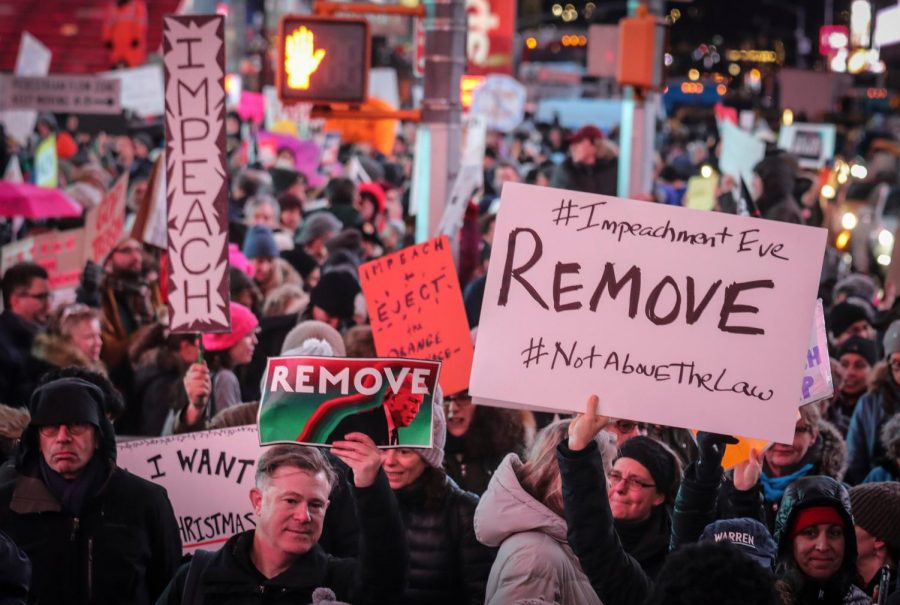 In the 2016 elections, President Donald Trump won the electoral college with a vote of 307 to 227, making him our 45th president of the United States. Throughout his four years of presidency, many Democrats have been critical of the things he has done during his time in office.

Now after almost his full term, Speaker of the House Nancy Pelosi initiated an impeachment inquiry against Trump under the first article- abuse of power and the second article- obstruction of Congress on September 24th, 2019. These claims root from a whistle blower making headlines in August sharing critical information about a phone call between Trump and the president of Ukraine, Volodymyr Zelensky.

It’s shared that Trump was asking for information on the 2020 candidate Joe Biden and his son Hunter Biden. The whistle blower (informant exposing an organization engaged in illegal activities) claims Trump had used the office to solicit interference from a foreign country for the next election, thus resulting in the launching of a formal inquiry into this controversy.

A week before Christmas, the House voted to impeach Trump, making him become the fourth US president to get impeached along with Andrew Johnson, Richard Nixon, and Bill Clinton. This was sent to the Senate earlier this week, and the trials are still ongoing.

For Trump to be fully removed from office, the Senate needs to rule with a two thirds vote, meaning 67 of the 100 senators need to vote for impeachment. With the party majority Republican, the voting may go down the majority line.

The inquiry started last week with the offense going first, and the defense following Saturday and ending the inquiry on Tuesday.With the following weeks ahead, we’ll see where the fate of our president lies.